Brooks D. Kubik Oct 25, 2021 Brooks D. Kubik
Back in 1993, I wrote a short course called BIG ARMS, which was edited by Stuart McRobert and published by CS Publishing, Ltd. As originally written, it featured Mike and Mike's Gym. Stuart thought readers would confuse Mike with Mike Thompson, a very popular writer for his bi-monthly Hardgainer magazine, so he asked me to change the name. After kicking around a dozen or so different names, we settled on Flynn and Flynn's Gym. The course was so well received that I wrote a second one called BIG BENCH – also set in Flynn's Gym – and on occasion, in my Hardgainer articles, I wrote a training article set in Flynn's Gym. But in my heart, I always knew I was writing about Mike's Gym – which is about the best darn place in the world to train, and a place that every serious lifter should visit at least once in his or her lifetime. Three years after writing the BIG ARMS course, I wrote and published DINOSAUR TRAINING: LOST SECRETS OF STRENGTH AND DEVELOPMENT, and the rest, as they say, is history. (That history included the original Dinosaur Files monthly newsletter, which often included training articles set in – you guessed it – a very Dino-style gym called by it's true name – Mike's Gym.)Today, over 20 years after writing that little course, I find myself besieged by readers who ask for an updated, revised, expanded course on serious, no-nonsense arm training for Dinosaurs – and for an update on Mike's Gym. One day not very long ago, after receiving yet another email making this request, I decided to clear the decks, chain myself to the keyboard for as long as it took, and hammer the little monster into existence. And that's how this course came into being.This brand new course does several things:1. It teaches sane, sensible, no-nonsense arm training as part of a complete, total body training program. 2. It gives you a complete three-stage routine for building strong, powerful, large and muscular arms. 3. It teaches you to avoid certain popular exercises because they can injure your shoulders or elbows. 4. It gives you an update on arm training methods that Mike and I have developed over the past 20 years.5. It gives you ALL NEW routines to build DINOSAUR ARMS – meaning arms that are big, thick, strong and powerful.I've enjoyed the work I've done on this course, and I've enjoyed bringing back Mike, Mike's Gym and Mike's world-famous canine companion, the inimitable Sam. Pay close attention to what they say. You'll learn a lot from them. I certainly have.Yours in strength,Brooks Kubik 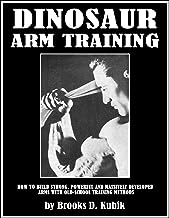