BERNARD WHIMPRESS Oct 25, 2021 BERNARD WHIMPRESS
"The Official Ashes Treasures" is the perfect way to celebrate cricket's most fiercely contested series. From the late 19th century England and Australia have met twice every four years and, since 1882, the prize for the series winners has been a tiny urn, purportedly containing the ashes of a bail burned after England had lost at The Oval. As well as a running history of the series, special features are interspersed, highlighting some of the legends from both teams, the controversies and the media. And, unique to the "Treasures" series, there are more than 20 items of removable facsimile from the past 120 years to pick up and hold. 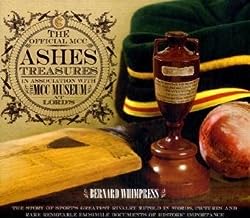